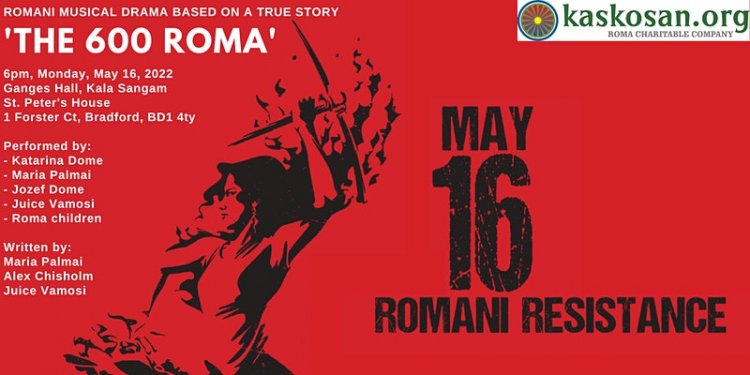 At 6pm on Monday, May 16, ‘THE 600 ROMA’, the first ever Romani musical drama in the U.K. will be performed in Romani and English on the occasion of 'Roma Resistance Day' by KaskoSan Roma Charity. Get your free tickets now before it’s too late.

Bradford Roma parents, children and Roma musicians gathered to empower Roma through the performance of a true story expressed in a musical drama in a city where Roma voices remain weakly heard. Bradford is one of the few cities with a Roma strategy in the U.K., it is also a strong candidate to become the cultural capital city in 2025 which are opportunities that Bradford Roma residents also want to exploit.

Romani people remain the least-liked, the poorest and the most disintegrated group across the U.K.

The musical play is focusing on questions such as why Romani Gypsies see each other as badly as outsiders, why they are unable to unite and remain the most disliked and the poorest.

OPA!, Romani cultural network in the U.K., run by KaskoSan and Ando Glaso Romani charities, are discovering and promoting Romani cultural talent in the mainstream world. After the success in Scotland, Bradford is the first city where the Roma talent search is kicking off in England through the first ever performance of ‘THE 600 ROMA’, musical drama. To learn more about OPA!, U.K. Roma cultural network, visit opa-opa.org

Roma families at KaskoSan Roma Charity and children at Bowling Park Primary School decided to act out the only occasion in history when Roma people showed solidarity with other Roma groups.

Juice Vamosi, film producer and founder of KaskoSan Roma Charity, says: ‘We at KaskoSan believe that individuals who can defeat their own ‘Gypsy’ prejudices and unite with other like minded people to save Roma lives and ‘Romanipe’, the Romani cultural identity (a collective of Roma cultural values and social interaction rules which has been developed throughout the centuries to compensate the lack of a physical homeland), should be celebrated as heroes on every May 16.

Janos Lang, founder of the ‘OPA!’ platform says: ‘Roma people do not have a country of their own; often lack physical homes, face anti-Gypsyism anywhere they are in the world. On every May 16, the ones able to resist and defeat their own anti-Gypsy stereotypes, whether they are Roma or non-Roma, and can unite with others to save Romani people and their culture, should be celebrated as heroes in the U.K.

To mark the heroic acts of THE 600 ROMA, the performance is starting at 6pm therefore we are kindly asking all guests to arrive by 5:45pm latest. The Roma resistance fight started at 6pm London time too on May 16, 1944, at the ‘Zigeunerlager’, the Gypsy concentration camp at Auschwitz-Birkenau.

With any questions, message us at info@kaskosan.org or find us on Twitter @kaskosanltd.